Today was H’s baby shower. The theme was Cowgirl and I’ve been working on the decorations for a few weeks. Since I’ve been so tired I haven’t done a lot of working on it so I pretty much crammed everything into the last week or so. Everything turned out pretty good, if I do say so myself. The banner I made using my Cricut and the Storybook and Old West cartridges. I was really happy with the way it turned out. Here’s another picture of the whole thing. The pictures are SOOC so nothing has been touched up. I’ll get to that later. Hopefully. **Update… I am fixing some of the pictures, so some are now touched up a little. I’ve noted the ones that are.** 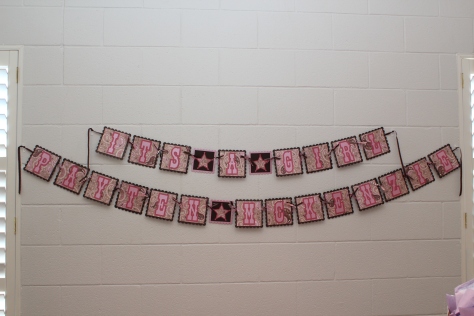 The food was all labeled with sheriff’s stars I found at Wal-Mart in the party section on clearance. 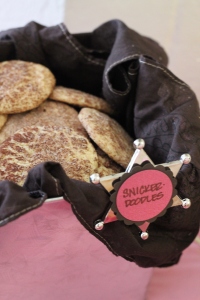 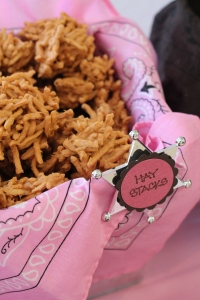 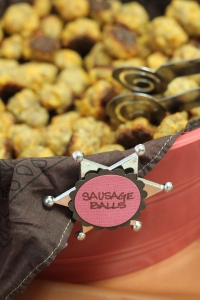 Pink and silver buckets were lined with pink and brown bandannas (the brown ones I dyed) and a lot of the snacks and finger foods were served from those. 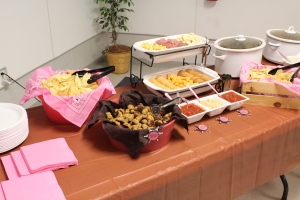 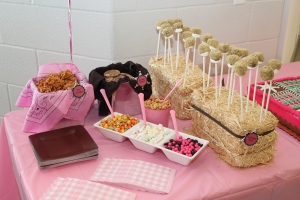 Here is a close up of the S’mores pops – H’s friend D made them and they came out so cute. I didn’t eat any as I still am not interested in most sweets (in fact I didn’t touch anything on the dessert table) but everyone else said they were really good. We stole the idea from another Western themed baby shower we saw online. Well, maybe not stole… just borrowed. The drinks we served from mason jars (also a borrowed idea). We had sweet tea (of course), pink lemonade, and water. The water was in a really nice drink dispenser of H’s Mom’s that worked out perfectly. We laid out lid-less mason jars for the water. 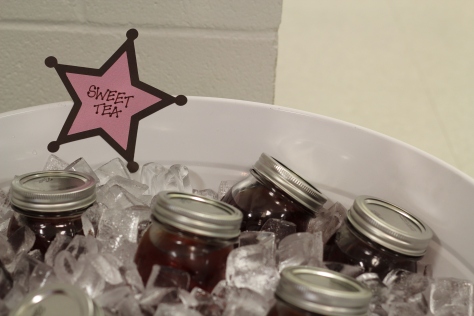 For my gift I made a diaper cake. This is the fourth one I’ve made and the second “themed” one. It went over really well; everyone seemed to really like it. I had the hardest time finding the horse to go on it. I looked everywhere and couldn’t find ANYTHING. Not that I could find one I liked, i just couldn’t find a darn horse. I ended up going to CVS on a whim and found this little guy. When I first picked him up I thought, wow, this is definitely not the cutest horse ever. But after I got him home and trimmed up his crazy eyebrows, posed him, and put the bow on, it really made the cake. 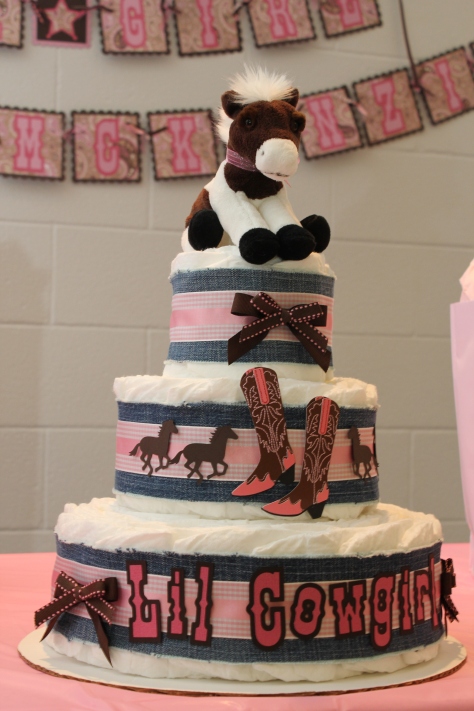 I also made a “Mom-to-be” ribbon for H to wear. The base part I bought at Michaels awhile back and I added the star and writing and the brown ribbons. Trimmed a few things off that came on it already to fit the theme I wanted and I was really happy with the way it turned out. I only wish that had been an option for my other friend’s shower. The pin I bought her was ok, but nothing like this. Maybe if she has another I’ll be able to do a nice one for her too. 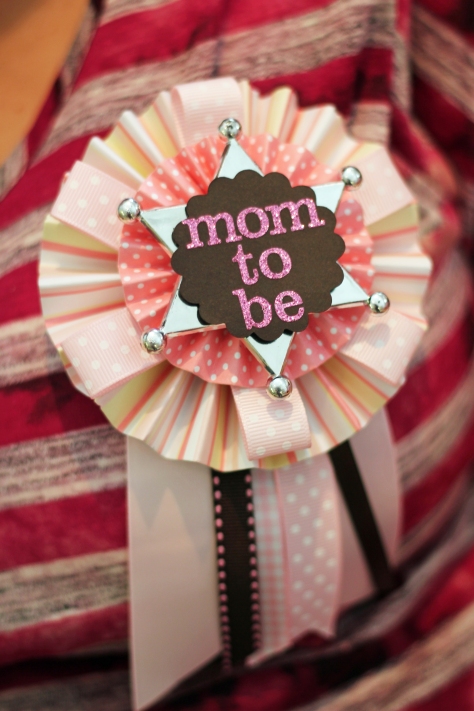 So now the shower is over and I feel as though I’ve been hit by a truck and then run over repeatedly. I wish I had tomorrow off from work as I’m pretty sure I’ll be dragging tomorrow too. Lunch will be shower leftovers I think. We had plenty left over to bring home. Not that that hurts my feelings much as I love me some little meatballs in my grape-bbq sauce, fiesta dip, and fresh veggies with ranch. Oh, and I managed to snag a bag of sausage cheese balls too. H was kind enough to share. I will leave you with a picture of K, H’s 4 year old, in the hat I re-decorated for the event. She didn’t actually wear it to the shower, but I managed to get her to let me get a picture of her in it afterwards at the house. Ok, this one is not straight from the camera. I modified it and it looks WAY better. Oh my, lots better.